Fireflies Continue to Delight Despite Rains 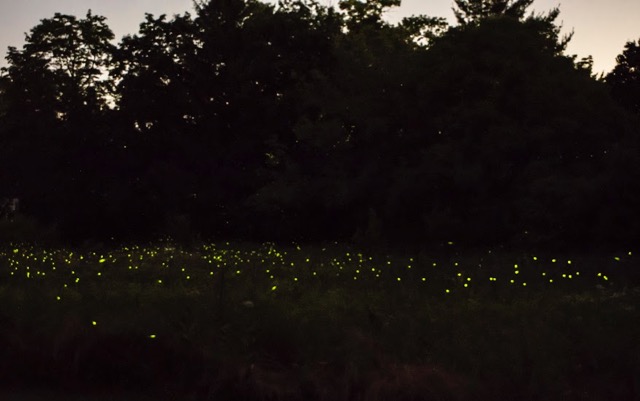 Land Trusters,
Bill McDonald did indeed host a firefly visit last night. We were three adults, one current high-school steward (John), one former steward (Justin), three college girls, and 3 college boys made 11 people stepping lightly in the not-so-dark woods and meadow.
Mars, Jupiter, Saturn all came out for us. The afternoon rains made for a spooky fog over the meadow, and the full moon sent the fireflies seeking darker tree cover. As the firefly mating season winds down the cricket and frog season gets underway.
We learned that of the thousands of species of fireflies we have about 17 in these meadows and traveling the firefly highway in between.
We learned about the importance of clean water, sprung from a subterranean aquifer that Bill says produces 2 million gallons per year down this side of the ridge.
We learned that the (pregnant) females are close to the ground and the males are up in the trees, synchronous pulsing in groups.
We learned about a species of female firefly that pretends to be somebody else, lures in the males if a different species, grabs on to them and eats their heads off.