Dear Stewards, Parents, Members, and Land Trust and Waveny Park Conservancy Supporters,
We have completed our first session of the Summer Steward Program of 2018! We accomplished a lot in these four weeks! Thank you to the Stewards of session one for all of your hard work, and to all those who support it for helping making it all possible! Next week, we look forward to the Flex Week, which allows interns to make up time they may have missed during their primary session, as well as provides an opportunity for stewards to further advance the progress on the Land Trust and Waveny Park properties. On Monday, we worked at NCLT’s Colhoun property along Davenport Road. The interns worked with local stone mason, Greg Faillaci to add on to the existing stone wall along the front of the property. The interns hand laid stones to build an additional 25 feet of wall, with only 10 feet remaining before the the project will be complete and we reach the Stamford City line. Later in the day, the interns worked to re-establish one of the trails on the property, by clearing the trail and pruning the obstructing roots and branches. On Tuesday, due to the predicted hazardous weather, the interns were tasked to work at home on research regarding various environments and topics that relate to the Land Trust and Waveny Park. Such topics included wetlands, stream restoration, the Endangered Species Act, forests and meadows. The interns were asked to investigate their importance, how to cultivate and maintain the ecosystems and the components that make up the ecosystems. Each steward had the option to explore the topics that pertain more to their interests. They produced thorough work that they are able to take with them, to understand the properties which we work to conserve. 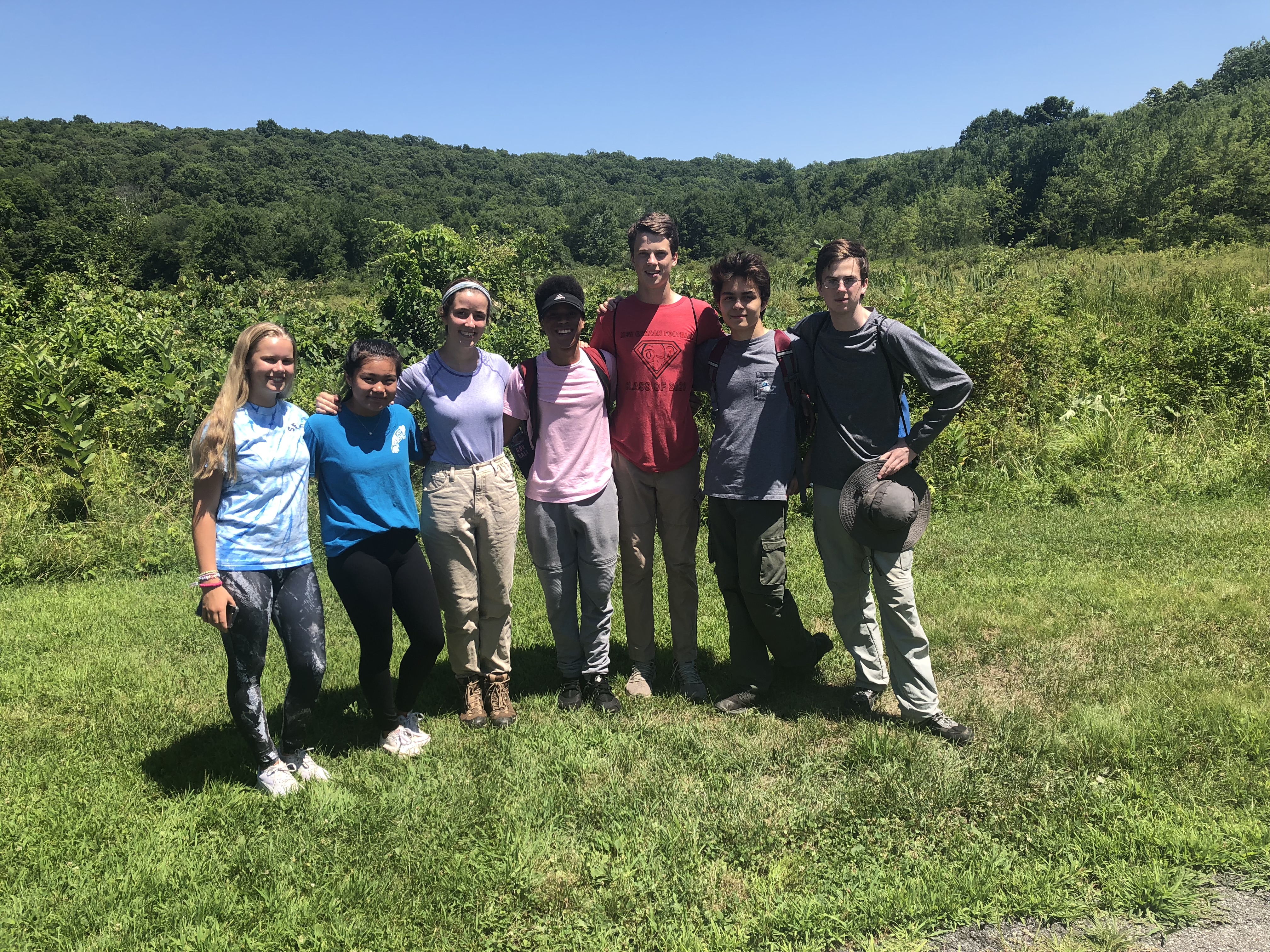 On Wednesday, we went on our second field trip of the 2018 Program. First, we visited the Wolf Conservation Center in South Salem, NY. There, the interns learned about the environmental history, biology, and geography of wolves like the Red Wolf and Mexican Grey Wolf. They learned about the national recovery program, and were able to meet the four ambassador wolves! After the tour of WCC, we explored the Ward Pound Ridge Reservation, 4,315 acres of open land, with 35 miles of trails, conserved by Westchester County Parks, in Pound Ridge, NY. We also visited the Trailside Museum where the interns enjoyed the interactive topographic map. Thursday, we worked at the Silvermine-Stillpond Preserve along Silvermine Road and Cedar Lane. After exploring the vast trail network, familiarizing themselves with the property, and appreciating all the hard work of last year’s stewards, the interns got to work. They re-installed drains on the downhill slope of the three existing water diversion bars, to increase the efficiency of the bars, to further reduce erosion on the trail. They also worked on de-vining eight of the Cedar trees in Hicks Meadow on the property, which prevents the tree from being strangled and suffer an untimely death. Throughout the day, the interns also worked to prune trees along the trails, and remove any obstructing roots and branches in the trail. Friday, we worked at Waveny Park. The interns watered the Swamp White Oak tree, collected more visitor surveys, reaching 122 surveys throughout the first session, cleared out 30 feet of the streambed, removed a large Winged Euonymus shrub that had grown to be six inches in diameter, and removed a few more bushes of Japanese Barberry, to reduce the competition for native plant species, so they can thrive. This coming week, the tentative schedule will be as follows:
(subject to change due to weather and time)
*Please note that next week’s forecast shows a high likelihood of thunderstorms. We will offer programming for the whole week, though some days may be spend inside working on various projects that are of benefit to the Land Trust and Waveny Park Conservancy. Any deviations from this schedule will be announced the evening prior.*
07/23/18- Colhoun**- Finish the stone wall along the entrance, re-establish trail and de-vine meadow
07/24/18- Waveny Park- Restore wildlife habitat
07/25/19- Waveny Park- Restore wildlife habitat
07/26/19- Livingston-Higley***- De-vine the rock wall in meadow and widen the trail
07/27/19- Waveny Park- Remove invasive plant species
**The parking area is on the north side of Davenport Ridge Road, between Skyview Lane and Thornridge Drive, across from house number 203.
***We will meet at the trailhead at the cul-de-sac of Apple Tree Lane, near 102 Apple Tree Lane.
There are many great things to come in the weeks ahead. Until then, please keep in touch with the Land Trust by email or at NewCanaanLandTrust.org, and also on Facebook and Instagram (@NC_Land_Trust).
Best,
Madeline E. Gould
NCLT Summer Steward Program Coordinator